The 99%: this time in Kiev’s Independence Square!

Contrary to a lot of the commentaries in the mainstream media, what is happening in Ukraine today is neither a return to the Cold War, nor a continuation of the Orange Revolution. 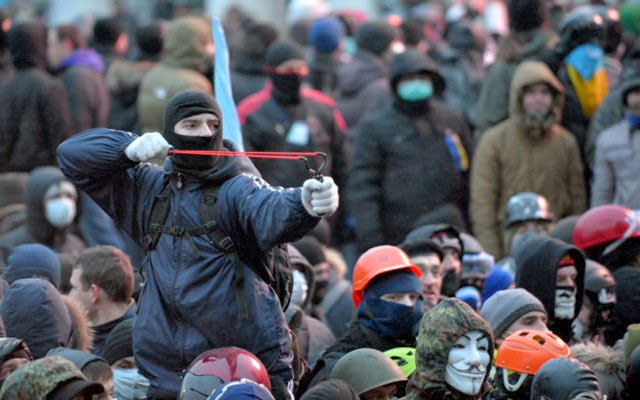 These events are an extension of the recent revolutions in the Middle East and North Africa, and the 99% movement in the West. The Cold War was about rivalry between two global blocs - the East and the West. The so-called ‘Velvet Revolutions’ were about transition into a Western-style free-market capitalism. The central issue of the present revolution in Ukraine is the clash of the people with the ruling classes and governments affiliated to both the West and the East. Just as in Egypt, so in Ukraine, people have come out and occupied squares to say they don’t want the existing situation and government.

The Ukrainian revolution has already succeeded in forcing the pro-Russian President to go on the run. But people have stayed in Independence Square and won’t give up their demands. The pro-Western option, namely joining the European Union, is no answer either. Indeed, the latest events began when such options reached a dead-end. The Ukrainian revolution is not the product of the rivalry of the world blocs; it is a product of those blocs’ desperation.

The Ukrainian situation today is a clear manifestation of the condition when ‘those above’ cannot carry on in the old way and ‘those below’ do not want to live in the old way. This inability and this refusal are not limited to Ukraine. Control has slipped from the hands of all the states involved – the United States, the EU, Russia and their allies. Rejection of the existing situation is also a global phenomenon: people of Ukraine are protesting against the same political, economic and social injustices as people everywhere.

Represented today in Kiev’s Independence Square is the 99% of the whole world. The Square is linked not to the White House or the Kremlin, but to Cairo’s Al-Tahrir and New York’s Zuccotti Park.