Atena Daemi, hope for many in Iran, must be freed! 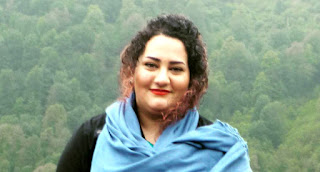 Atena Daemi is known as an Iranian anti-execution campaigner and many, among them Amnesty International, are calling for her release. Fighting against executions is just one part of Atena’s work however; there is a lot more to her and the reasons why she has been subjected to the worst of ill-treatments by the Islamic Republic of Iran.

Atena Daemi stands for life and humanity – the total opposite of the Islamic regime’s core essence, inhumanity and injustice. She is a children's rights, a women's rights and an anti-execution campaigner. She fights for the rights of the first and most vulnerable victims of the Islamic regime and for the life of those who are condemned to execution.

She keeps writing even in prison under the harshest conditions, and inspires many to fight for humanity.

Atena Daemi’s father was with her when she was sentenced in the Islamic regime’s court of injustice. Her father Hosein Daemi wrote:


I'll never forget when they brought Atena to court.
Judge Moghiseh told her: Are you against execution?
Atena: Yes, I am against execution.
Moghiseh: It's none of your business, we execute whoever we want. And those “human rights people” can't stop us.
Atena: One day you will have to answer for those innocent people you hang, and that day is coming soon.
Moghiseh expelled Atena from the courtroom and sentenced her to 14 years in prison.
Atena Daemi was arrested in October 2014.
She spent the first 86 days in solitary confinement.
She was moved to Evin prison on 18th January 2015.
She was sentenced on 14th March 2015 to 14 years for ‘propaganda against the regime, conspiracy against national security, insulting the leader of the regime, insulting Khomeini, and concealing evidence.’

Interrogations, accusations, court of injustice, solitary confinement, torture, long prison sentence, harassment and arrest of her family members, persecution, and more torture for Atena Daemi because she points out the problem, the Islamic regime and its inhumanity, and proposes the solution, humanity.

In addition to campaigning against execution and for women's rights, Atena is a passionate defender of children's rights. This is what she wants to change:

These statistics are from the regime's census; the reality is disastrous. Tens of thousands of children are homeless and face all sorts of dangers including rape, exploitation in the drug trade, being victims of the body parts trade, everyday humiliation, and hunger.

It's for her uncompromising defence of the lives of the deprived and bringing hope to them that she is subjected to the most inhuman treatment. Atena Daemi is treated so cruelly because of what she stands for: bringing moments of happiness to children who are deprived of love, who are destitute, forced to work, forced to marry, forced out of schools because they are poor or foreigners, forced to live in slums.

The hope for change that Atena brings to society disarms the regime which has remained in power by taking away hope and terrorising society with executions and the imposition of brutal poverty.

There are no numbers or words to adequately reflect the “depth of the inhumanity”, but there are people like Atena who risk their life to change the life of just one child if they can. The ones who endure torture, solitary confinement, immense pressure and whose messages from behind bars are all about “passion for humanity” and “a better world for children”.

Atena Daemi stands for the humanity that we all share and the ideals we all hold dearly. We call on all international humanitarian organisations and workers' organisations to demand the immediate and unconditional release of Atena Daemi.

People of Ahvaz, steelworkers have called on you for support

Respond to their legitimate call!

People of Ahvaz. For over three weeks now, you have followed the solid and united protest of the steelworkers on the streets of Ahvaz against poverty, oppression and injustice. You've heard their vibrant chants against the thieves and the parasites.
Leaders of the workers say: “We are one body and stand as strong as steel to get our rights. The time when we were treated like slaves is over. We stand our ground until we make our demands a reality!” 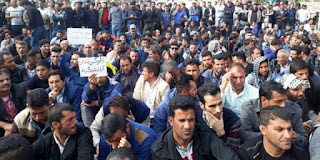 Undoubtedly, all of you who are fed up with the current misery have heard the encouraging and enthusiastic words of the steelworkers’ leaders. This fight is over unpaid wages, restart of the production lines and elimination of the threat of job losses that looms over 4000 workers and their families; this is a fight in defence of workers of Haft Tapeh and for the release of the detained workers; this is a fight against poverty, high prices, oppression and lack of rights.
This fight has paved the battleground for all of you, for teachers, for retirees, for unemployed youth, for women and for all of you who are tried of the current situation in Iran. Surely you do know that and stand by the workers, as you've been doing by attending their protests; but you can play a much bigger role in this struggle. Leaders of the workers ask for your support and to take action.
We, too, along with the leaders of the steel workers, call on teachers, petrochemical workers, university students, youth, women and all the oppressed people to actively, in any way you can, support the steel workers. Support the workers and strengthen their ranks against a bunch of parasites.
Join the steel workers and their families and fight for the release of the imprisoned workers of Haft Tapeh, while voicing your own legitimate demands.
There are many more strikes that are going on in Ahvaz right now; all the strikes should be synchronised and a united strike organised across the whole city.
The city of Ahvaz must stand up as one body and show undivided solidarity with the striking workers to push back the oppressors.
The power of the parasites and their repressive forces is shrinking day by day, and you have the power to put them in their place, and, thus, just like the steelworkers and sugar cane workers, set an example of unity and solidarity for the whole society.

Asqar Karimi is the head of WPI’s Executive Board
No comments: