The regime of crime and deceit must go

Message by Hamid Taqvaee, Leader of the Worker-communist Party of Iran, on the admission of the Islamic Republic of having shot down the Ukrainian passenger plane 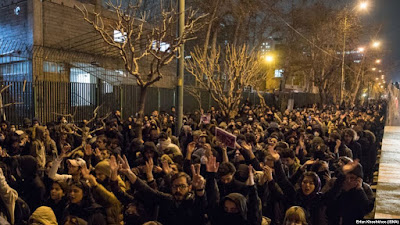 The admission by the Islamic Republic that it has shot down the Ukrainian passenger plane demonstrated before the whole world the degree of mendacity, deceit and shamelessness of a criminal regime.  After three days of denial and peddling of lies, and once irrefutable evidence had been released by experts and states around the world, they were forced into an admission.

This was not just an admission of a horrific crime; it was also a confession to lying, deception and shamelessness by criminals who had failed in the cover-up of their crime.  This is not a human error, but the ‘error’ of a system that kills and denies; something they have been up to for forty years.

This is the last page in the dark record of a regime which from the very beginning of coming to power has maintained its hellish rule through crime, murder, lies and deception.  The people of Iran know this criminal regime very well.  The crimes of this regime, from the 1980s massacres to the state ‘serial murders’, to shooting protestors on the streets - the latest example being the massacre of around 1500 in the November 2019 protests - are known to all in Iran.  Now, with the catastrophe of shooting down a passenger plane, the depth of criminality, deception and shamelessness of the Islamic Republic becomes known to the people of the world too.  Now people around the world also understand, more than ever before, the legitimacy of the struggle of the people of Iran to free themselves from the menace of this criminal regime.  This scandal can and must be turned into a final blow to pull down this hated regime.

The protests have already begun.  Hundreds of people have come out on the streets of Tehran chanting ‘We didn’t give up those lives so as to compromise and worship the Leader’ and ‘So many years of crime, death to this regime’.   Shamed and disgraced, the Islamic Republic has ended up in a most feeble and fragile state. Let us come out on the streets in a solid and united rank and turn the vigils and commemoration of the victims of the plane crash into a powerful wave of protest against the entirety of this system of lies and murder.

In memory of the victims of the plane tragedy and the November 2019 uprising!

Down with the criminal Islamic Republic of Iran!