The Protests and the Uprising in Iran continue with greater intensity 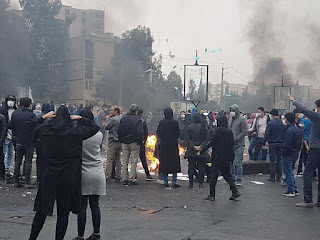 On 15th of November 2019, the price of petrol in Iran was raised drastically. The rationed petrol price was increased by 50% while the price of non-rationed petrol was tripled. The Islamic regime in Iran claims that the petrol price increase would be beneficial to the people. However, the people in Iran, the majority of whom suffers from acute poverty, took to the streets in large numbers to protest the price increase. The first peaceful demonstrations that quickly turned into a violent uprising owing to the brutal attack of the special forces on demonstrators, took place in Isfahan, Shiraz, Bandar Abbas, Karaj, Ahvaz, Gatvand, Mahshahr, Behbahan, Khorramshar and several other cities.

Eventually, the protests intensified and expanded to more than twenty cities and the slogans turned more radical and political. People chanted “Down with the Dictator” (meaning the supreme leader Khamenei), “Don’t be Scared, We are all United”, “Shame on you Dictator, Leave the Country Alone”, “Mullahs Should Get Lost”, “The Price of Gas Increases, The Poor become Poorer”.

On the second day of the uprising, people in cities such as Tabriz and Kermanshah clashed with the security forces and the special police. On November 16, the fuel tanker drivers in the province of Khuzestan went on strike in support of the protestors. The same day, people succeeded in taking control of several districts and boroughs in cities such as Abadan, Ahvaz, Behbahan, Khorramshahr and Omidiyeh and prevented the police and the Special Forces from entering the cities and neighbourhoods. The same day, students in several cities joined the protests. Students of the Free University of Gohardasht in Karaj took to the streets while chanting “Our People is Rebellious, Has Had Enough of Slavery”. This slogan in fact reveals the radical leftist emancipatory potential of the uprising as it not only aims at the Islamic Republic, but also the capitalist relations of production that are guarded by the Islamic regime in Iran. On the same day, the students of the University of Urmia also joined the uprising. In a communique that was issued the same day by the Worker-communist Party of Iran, people were called upon to form their committees and councils in order to take control of boroughs, districts and cities.

November 16, is also the day that the people in Isfahan’s Zeynabiyeh district set the Howza-ye Elmiye (the common name of the vocational school were mullahs are trained) on fire. In the town of Andisheh, people occupied the paramilitary Basij’s station. In Tabriz, several stations of the security forces were set on fire. In Vaeen a precinct was set on fire while in Ghale Hassan-Khan, a borough of the city of Quds, the protestors burned down the governor’s building. In Aryashahr, a district in the west of Tehran, people took to the streets chanting slogans such as “Down with Khamenei” and “Enough with the Islam with which you have made people miserable”.

Within the first two days of the protests, twenty eight people, including a twelve-year-old child, were killed by the security forces of the regime.

The protests accelerated and the number of participants rose drastically on November 17. The protests turned also more radical, which is visible in the slogans the protestors chanted. In several districts of Tehran and Mashhad the protests continued well into the night with people chanting “We Don’t Want the Islamic Republic”, “Down with Khamenei” and “Down with the Dictator”. On Azadi Square in the city of Mashhad, people destroyed an armoured vehicle that belonged to the Special Forces. In the city of Khorramshahr, people set the governor’s office and several other government buildings on fire. In Karaj, people set at last 15 banks and police stations on fire and burned the flag of the Islamic regime. In the Tehran borough of Robat-Karim a gas station, in the district of Tehran-Pars a bank, and in the city of Quds the governor’s building and a number of banks were set on fire. Protestors burned down a police station in the Mali-abad district of Shiraz.

On the same day, the Islamic Republic, fearing that the protests would spread even wider and a potential general strike, closed down schools for two days allegedly due to severe weather conditions and heavy traffic.

According to official statements, more than a thousand people were arrested and detained until November 17. On November 18, however, the families of the detainees gathered in front of prisons in Ahvaz and Behbahan demanding the immediate release of their loved ones. The families were also accompanied by other people.

On November 18, workers of the Polyethylene Petro-chemistry Complex of Mahshahr went on strike protesting the costliness of living expenses and poor working conditions. Meanwhile, it was reported that trucks that carry loads from and to the Complex were stopped by the protestors and their loads confiscated by the people. The fuel tanker drivers’ strike continued. The regime tried to use trucks that belong to the Revolutionary Guards (Pasdaran) to transport fuel but it was reported that they did not succeed as they were prevented from doing so by the people.

It has also been reported that on November19, despite all the threats of the regime, the workers of the Haft-Tappeh Sugar Cane Complex went on strike and marched toward the governor’s office. People joined the workers’ protests and many women were on the frontline of the march. In Mahshahr, the regime brought its military forces and tanks into the streets. However, the people were not intimidated and the protests continue in this city too. The protestors also attacked the Howza-ye Elmiyah and the offices of the Friday prayer Imams and set them on fire in Kazerun, Ahvaz, Shiraz, Isfahan and several other cities. This shows the depth of the people’s hatred towards the Islamic regime and Islamic rule.

In the face of the uprising, the regime panicked and has had several emergency meetings. The regime has shut down the Internet in order to prevent people from communicating the news of the protests; they have also blocked telephone lines. But the uprising continues with greater intensity and momentum and the protests have spread to more than one hundred cities as of today, November 19.
Schools and universities are closed until November 23, in Tehran and many other cities, and premier league football matches have been suspended. Despite all the atrocious and barbaric acts of the Islamic Republic that so far have claimed the life of hundreds of protestors, the people won’t budge and they are continuing their revolutionary movement to topple the Islamic regime. This uprising is the prologue to a massive social revolution that will end the Islamic Republic and will create a secular, free, equal and humane society.

The Worker-communist Party of Iran
November 19, 2019