The Protests will turn into an all-encompassing Revolution 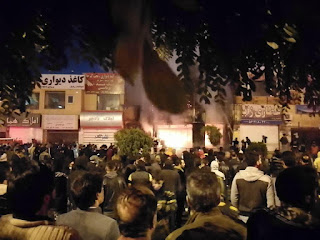 The Islamic Republic, who has implemented an undeclared martial law, shutting down the Internet, killing hundreds and arresting thousands of protesters, claims that the protests are over. But the very nature of these recent crimes shows that the revolution to overthrow the Islamic regime must and will continue. The Islamic Republic is a state of plunder, robbery, corruption, reaction, and crime and should be done away with.

The masses of deprived and exasperated people, the workers, teachers, retirees, women and the youth of this country are determined to dispel the Islamic nightmare and to do so they continue to protest boldly and in spite of the crimes of the regime’s armed mercenaries.

The recent protests began over an increase in the price of petrol, but as in the revolutionary uprisings of the 2009 summer and the 2017 winter, the slogans of “Down with the Dictator” and “Down with the Islamic Republic” soon dominated the protests. There were clashes with the regime’s mercenaries everywhere. People took control of neighbourhoods and did not allow the regime’s mercenaries to enter.

The day will come soon when the revolutionary people will sweep away the entirety of the regime together with its judiciary, legislature, police, Revolutionary Guards, paramilitary Basij, its religious seminaries and the totality of the Islamic collusion. The Islamic Republic has confronted the people with tanks, prisons and its criminals; the people will respond with nationwide strikes and protests. The overthrow of this despicable and reactionary regime is inevitable.